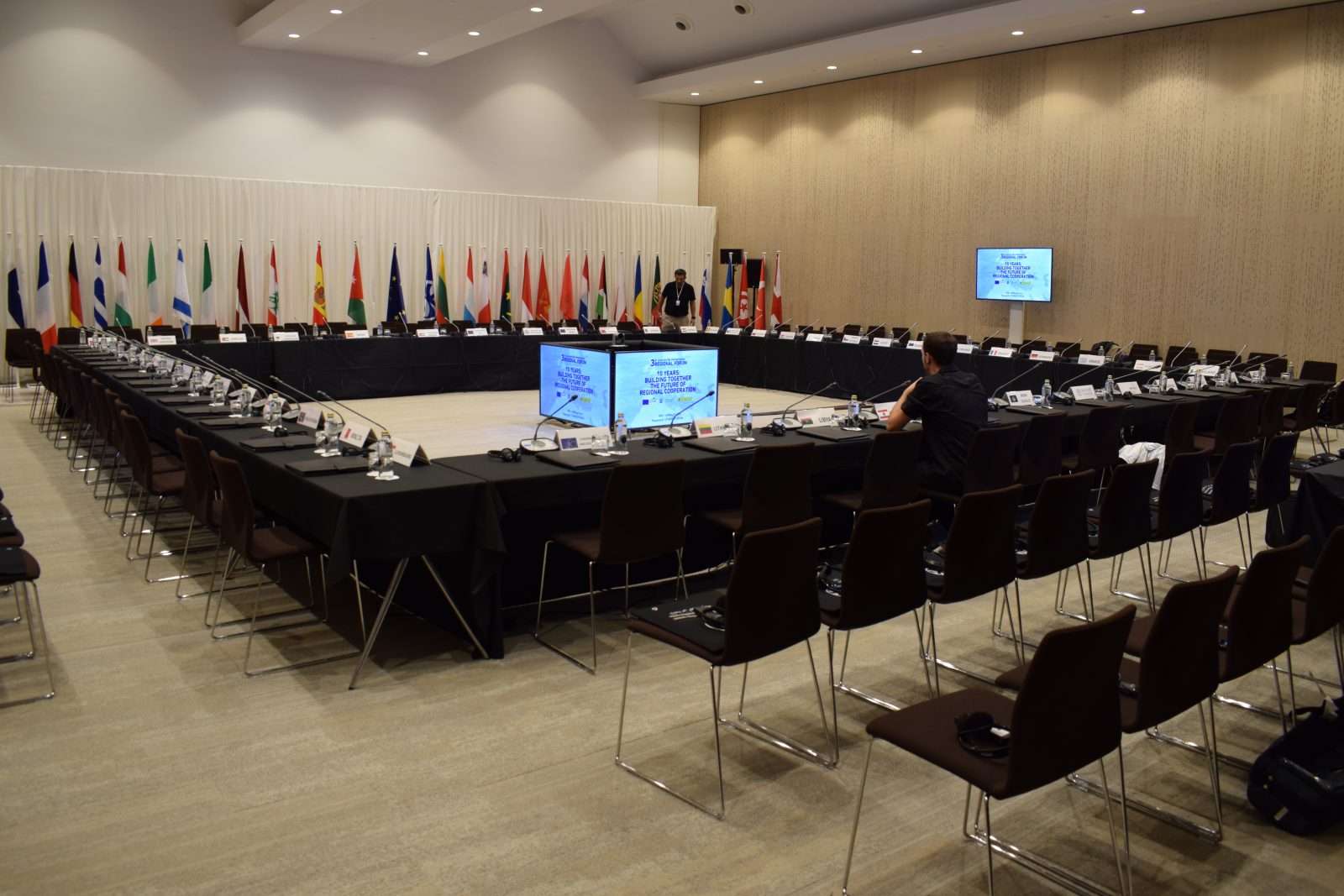 It is always a pleasure and a privilege when our clients place their trust on us for high level governmental meetings. These are events where policies are discussed and decisions that will affect all of us are taken.

Simultaqneous interpretation is key in these kind of meetings, as a clear understanding is crucial to make sure there are no misinterpretations that can lead to bigger problems.

Recently, we provided our services for a ministerial meeting in Barcelona, where foreign ministers from all Mediterranean countries met to discuss issues that affect the region and all its inhabitants.

This event proved to be a challenge as it was quite complicated, with several rooms working at the same time and with signals being sent between them. 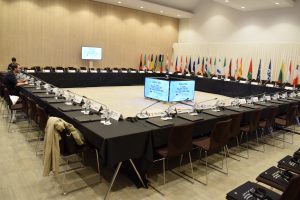 We provided all audiovisuals for the meeting, as well as audio and video recording of the sessions and signal sending between the rooms.

Let’s see a bit what we provided for each room:

In the main ministerial room, with an imperial setup, we had 4 60” monitors on the center so that ministers could see any presentation that would be shown. We had 4 more 60” monitors set around the room.

We also provided the room with sound system, 55 conference microphones (one for each minister), 130 digital receivers so that any minister or delegate that required interpretation could have that service.

All the booths had a Bosch digital interpreting console for each interpreter, the room was radiated with IR Bosch radiators, making sure the whole room had crystal clear interpretation signal.

These same signals were also wirelessly sent to another floor where the press waiting room was located.

Apart from this, we had a Gimbal DJI camera placed in the center of the imperial setup controlled remotely by a tech, with which we could focus and zoom on any minister that took the floor. This was necessary both for the video recording, to send the video signal to other rooms and to allow interpreters to have direct line of sight to the speakers through 24” monitors placed inside the interpreting booths to guarantee a high-quality interpretation.

We also had another fix camera with a wide angle shot that was switched to whenever the Gimbal DJI camera was changing between speakers. In the same room, we also had a Roland VR50 HD multi format AV mixer used to mix the PC and the 2 cameras signals, a Black Magic signal converter, a WDP323 three phase power splitter, as well as a digital mixer, audio expander… 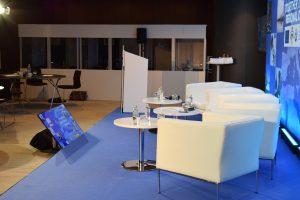 That was the main ministerial room. Right next to this room there was the “Listening room” where delegates from all countries were while the ministers meeting was going on. In this room, the delegates had access to video, audio and interpretation signal.

We had 4 60” monitors around the room and 4 90” monitors where delegates could see the signal sent wirelessly from the ministerial room. We also had a sound system set where the floor audio signal could be heard.

Delegates from countries that needed interpretation had 165 digital receivers at their disposal to listen to the interpretation. We had the room radiated with IR Bosch radiators and had the video signal received and sent through an PLS 350 Analog Way mixer and sent to all the monitors with a HD/SDI distributor. 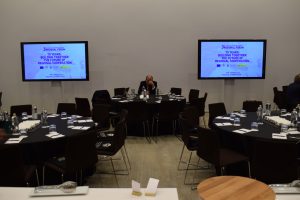 Right in front of the ministerial room there was the Press Conference Room, with an independent system, whereby no signal was sent out or in from the room. In this room, we had 4 interpreting booths, 3 double ISO 4043 booths and one triple interpreting booth, also ISO 4043 compliant.

In this room there were 2 different setups, the first part of the day this room was used to hold several debates and panels of guests discussing about the issue of job creation. In this setup we set 2 60” monitors, 2 40” monitors for reference and counter with support for speakers, as well as 2 20” monitors. 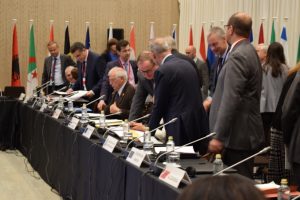 After the main minister’s meeting was over, they moved to the Lunch Room, where they discussed several issues while having lunch.

Audio and video signal was sent from this room into the Listeners room. We had setup 25 conference microphones so that ministers could speak and be heard by their colleagues either through the sound system also set in the room or through the Infrared receiver (50) each minister had in case they needed interpretation.

The interpreters were placed outside the room because of the limited space available, and we setup a CCTV system to provide them with shots of the lunch and of the minister that was speaking at every given moment.

A Ginbal DJI camera with a Sony Anycast mixer that was controlled by a tech from outside the room and used to send video signal into the 24” monitors that were placed inside each interpreting booth (3 doubles and 1 triple ISO 4043 booths). Same as with the Ministerial meeting room we also had a fixed camera with a tripod as well as a recorder SDD Atomos we used to record the live edited video from the lunch. 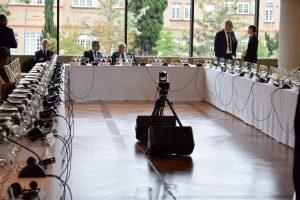 As mentioned above, audio and video signal from the ministerial meeting was sent wirelessly with a Matrix 6G SDI 20/20 Black Magic Smart Video Hub both to the Listening Room for delegates and to the Press Waiting Room 2 floors up, where we had 5 60” monitors where journalists could have access to video signal that had passed through a Matrix 6G SDI 20/20 Black Magic Smart Video Hub. Same as in the Listening Room, the Press Waiting room was also radiated and got interpretation signal that could be heard with the 100 digital receivers we had there. The floor signal was heard through a sound system we also set.

Here we received all the audio signals (floor/ English / Spanish /French / Arabic) and these signals were sent by an Audio Signal System AVIOM + 300 to our 4 press patch boxes with over 70 outputs and where journalists could get the signal of the language they needed.

All this setup was a challenge and seeing the end result was a great satisfaction. All the long hours and effort invested definitely paid off.