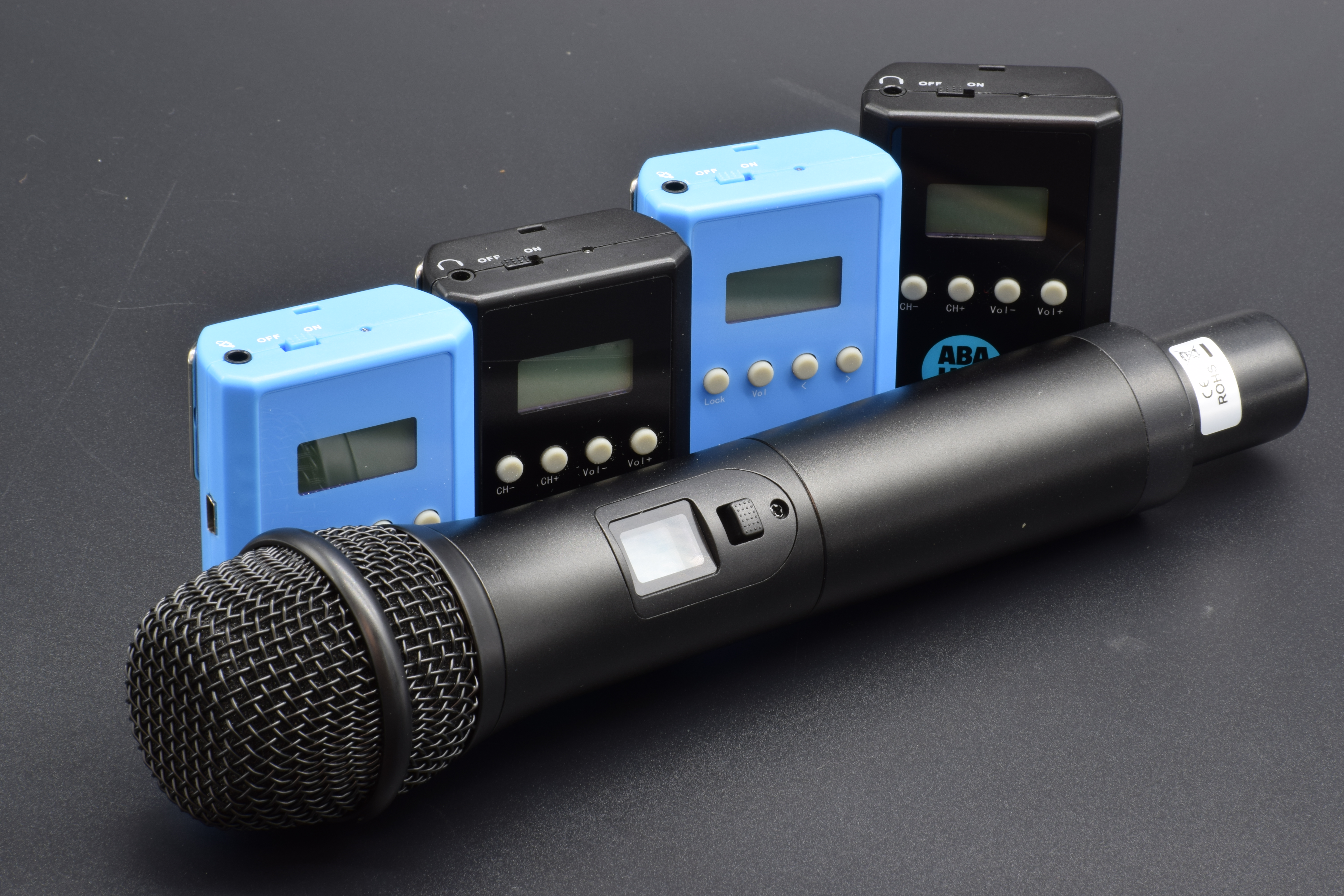 This is an in-house developed system, and it is actually a system that can be used both as a “fixed” system in events with interpreting booths or also as a portable system where the interpreter carries a portable transmitting microphone with him/her.

After years of using several portable systems, Abalingua decided to step up the plate and develop its own system, with the vision of a system that could be both used as portable as well as fixed system, with the versatility of being used in guided visits as well as a regular receiver in large events, in large venues or in open spaces. We listed the pros and cons of the systems we had used before and achieved reaching all the pros on that list, while at the same time getting rid of the cons.

Some of the issues we identified as being a problem on the portable systems we had been using for years were :

Portability: The size of our Abasystem receivers is much smaller and lighter than other available systems nowadays. It always surprises our clients how clear the signal is and how many advantages our system has over other portable systems. As soon as an interpreter tries our system, he becomes enchanted with it and does never go back to asking for any other system. Some interpreters like to take the receivers with them on a backpack, where they can take many receivers in a small space. Some other clients prefer the 40-50-60 unit suitcases we provide these receivers with. These suitcases can be checked in as cabine luggage if they need to be flown, which makes Abasystem even easier to move around.

Battery life: Abasystem guarantees an excellent battery life, as our receivers can be use in seervices with long hours. You can expect to have the receivers working for 5 days straight in 8-10 hours daily usage. No need to recharge batteries, just change them into a pair of new AA batteries and you are ready to go for another 5 days. We have designed the receivers so that the screen blinks when there is need to change the batteries, avoiding unnecessary battery changes.

Number of Channels: This isn’t usually a problem with portable systems, but we have ecncountered several occasions where there were several groups roaming in the same area and with the traditional portable systems you had to be very careful to avoid intereferences if there were more than 5-6 languages being interpreted into , while with Abasystem we can guarantee 30 languagesw working side-by-side with no interference problem whatsoever.

Receiver loss cost: This is a good one. We had always been astonished at the cost clients had to pay when receivers were lost. Same happened with the microphones, which are even more expensive. Any event that had worked fine could be tarnished by the fact that the client had to pay a high sum of money to account for receiver loss. This was one of the things we had very clear  we wanted to tackle from the beginning. We achieved bringing down the cost of receiver loss to just a fraction of what it had traditionally costed, and brought down the cost of microphone loss as well.